Here’s a round-up of the pieces performed at Hello Word! on May 6th, 2011. Many of the photos below were taken by Aaron Uhrmacher (see the full set here). The performance was the final project for students in Reading and Writing Electronic Text, a course I teach at ITP. 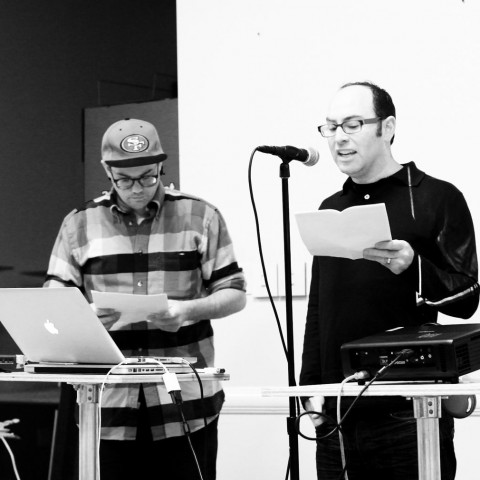 Aaron Uhrmacher and Chris Allick, Showetry. Aaron and Chris presented a number of exceptional pieces generated by juxtaposing lines recovered from phrase searches in YouTube subtitles. The documentation page has an audio recording of Aaron’s performance. 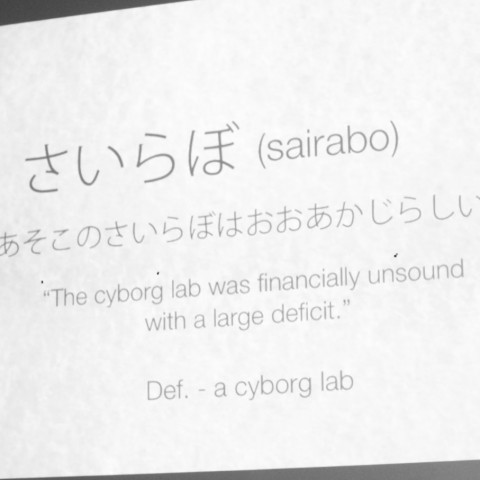 Alex Dodge, 新しい言葉 (New Words). Alex used a statistical model of a Japanese lexicon to generate new words that sound Japanese. He then assigned definitions to these words and created example sentences. Alex performed his words in a pedagogical frame, showing each on a separate PowerPoint slide. (My favorite word/definition is shown in the photo above.) 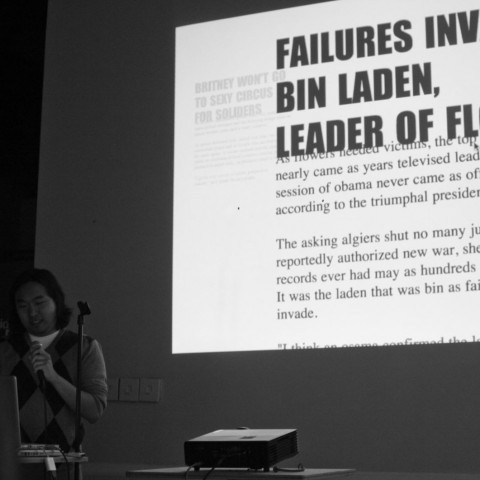 Alvin Chang, Hello World News. Alvin scraped data from Twitter and Wikipedia, tagged the words by part of speech, then squeezed them into a context-free grammar designed to mimic the structure of news stories. The pieces turned out great, and the titles that Alvin made up to go with the pieces are hilarious.

Blythe Sheldon, Sorry To Hear. Blythe used Markov chains as a way to get at the syntactic similarities among the many condolence e-mails that she received during the course of the semester (her mother passed away in March). 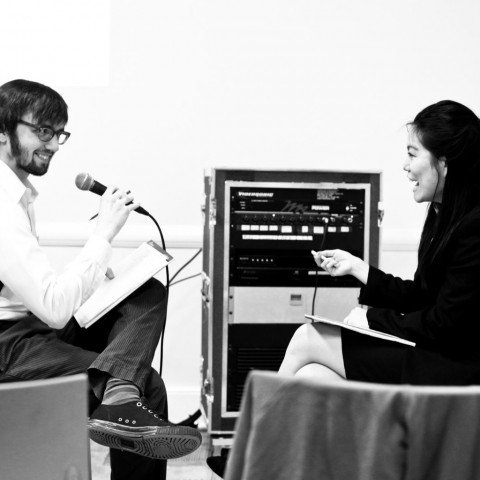 Diana Huang, Hi, Hire Me. Diana used a context-free grammar generator to create a generic script for a job interview. Her (impeccably rehearsed, perfectly timed) performance, in fact, took the form of a job interview, in which each of the interviewer’s questions were answered with the same algorithmically generated response. It was a big hit with the audience! 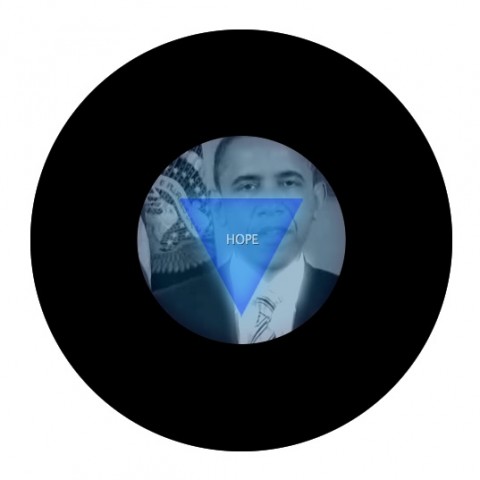 Fred Truman, Magic 8 Bama. Fred made an automatic Obama prognosticator! Send a tweet to @magic8bama, and the Magic 8 Bama will respond with a cryptic message (generated with a Markov chain). The words in the generated text are paired with video clips from an actual Obama speech, making it look as though Obama is actually speaking the words in the text. It works surprisingly well, and the audience loved it. 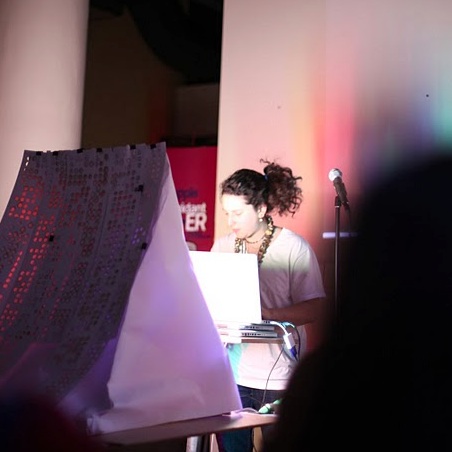 Gabriella Levine, The Human Repeater. Gabriella performed by typing a personal text into an audiovisual instrument of her own design. Super intense and engaging.

Jack Kalish and Yonatan Ben-Simhon, Illumination. Jack and Yonatan read pieces generated by their automatic newspaper blackout poetry device (recently exhibited in the ITP show). Both the pieces and the readings were excellent. Definitely watch the video and read the documentation—Jack and Yonatan’s work here is exceptional. 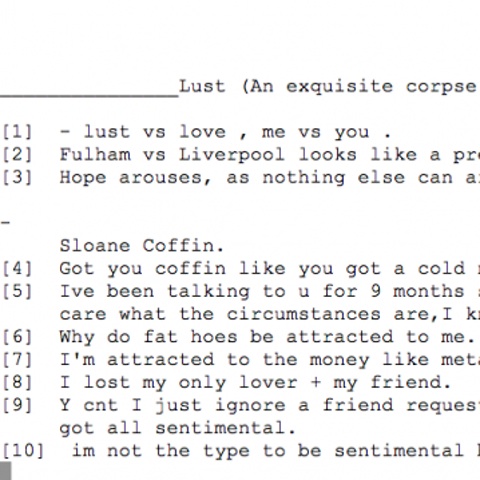 Martín Bravo, Exquisite Corpser. The Exquisite Corpser builds an endless chain of tweets, based on geography, emotion, and lexical characteristics. During the performance, Martín had members audience volunteer to read the tweets as they came in, recapitulating the polyphonic nature of Twitter itself. Very well done. 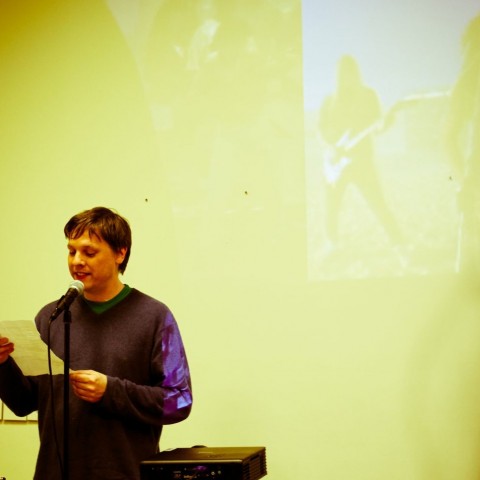 Sean Fitzgerald, Slayer vs. Slater. Sean juxtaposed lines from Saved By The Bell episode summaries with lines generated by a Markov chain analysis of metal lyrics from darklyrics.com. All I have to say is: awesome. 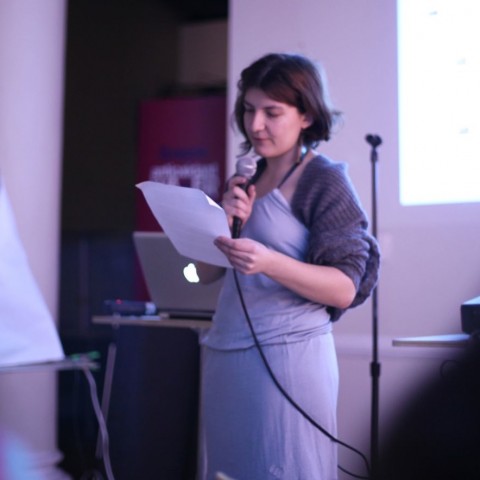 Sofy Yuditskaya, In all time and all space with all of us, and everything. A kind of meta-myth generator, very evocative. 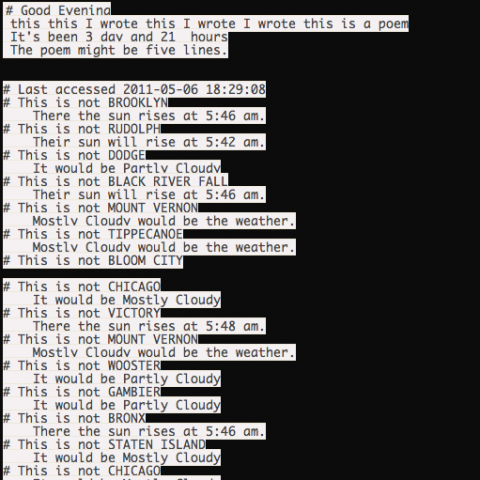 Steven Klise, Last Accessed/Last Modified, an attempt at literal “computer poetry” (as in, “what would a computer write poetry about?”). The piece succeeds in having a totally alien syntax, and I love the repetitive structure in this piece. 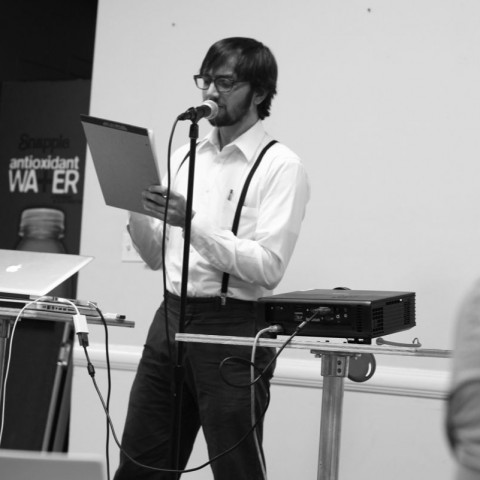 Will Jennings, Stack of Babel. This was a great performance—very brave and challenging to read what was essentially a generative sound poetry piece. Make sure to read Will’s thoughtful write-up.