Your World of Text 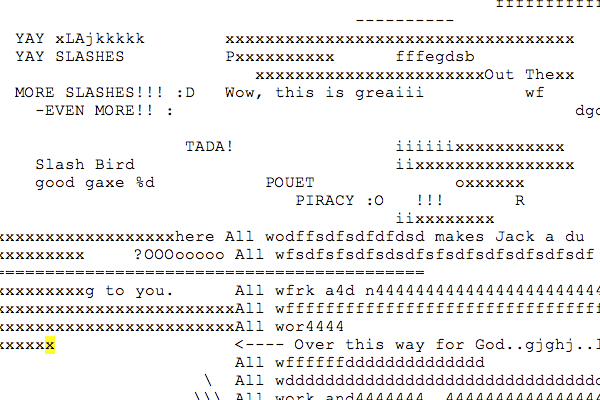 Your World of Text, a collaborative text composition tool. Anything you type appears in real-time for other users. Anyone in the world can edit. The “page” itself scrolls forever in any direction, so if you can’t find a blank spot, then just hunt around. It’s running on the Google App Engine, with a backend (presumably) in Python and jQuery in the browser.

It’s a great example of how a new interface for writing can lead to weird, fascinating, beautiful writing that distinctly arises from the affordances of the interface.

Interesting to me: The fact that the page is infinite leads to a conflation of layout and territory. There’s the hotly contested initial area, where everything is constantly being rewritten, but then there are “backwaters” off in the margins that are seen less, and therefore have fewer changes. There’s no way to link or jump to a particular part of the page, so some users have created “trails” (in the form of ASCII art or small bits of text) that lead from the central area off to their own little corner. Where you put your text, and how the text is shaped, is just as important as what you’ve written.