I made a new Twitter bot. It’s called @PowerVocabTweet. Here’s a screenshot: 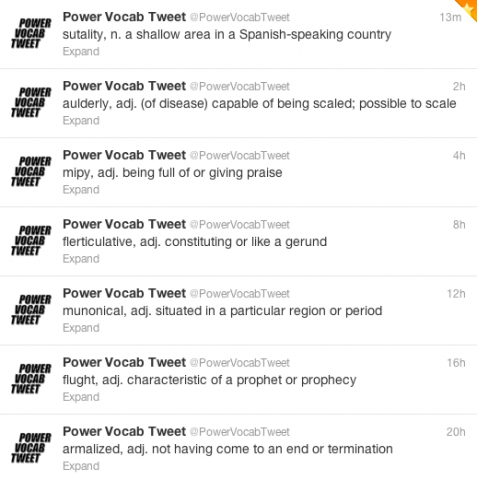 On the surface, Power Vocab Tweet is a parody of “word-of-the-day” blogs and Twitter accounts. My real inspiration, though, comes from the novel Native Tongue by Suzette Haden Elgin. In that book, a group of underground linguists invent a language (Láadan) that “encodes” in its lexicon concepts that aren’t otherwise assigned to words in human languages. Elgin’s contention is that the manner in which a language “chunks” the universe of human perception into words reflects and reinforces structures of power; therefore, to break the world up into words differently is a means of counteracting the status quo. (In a much less rigorous way, I attempted to explore similar issues in my design of Pey Shkoy—except in the systems of grammatical roles and thematic relations, instead of in the lexicon.)

Elgin’s protagonists (and Elgin herself, in the design of the Láadan language) did this with laser focus; Power Vocab Tweet does it in a more scattershot way. It claims random (and potentially nonsensical) patches of semantic space (which may already be partially claimed), assigns words to them, and hopes that something sticks. Try using one or two Power Vocab Tweet words in a sentence. It’s fun!

The definitions are generated via Markov chain from the definition database in WordNet. The words themselves are generated from a simple “portmanteau” algorithm; each word is a combination of two “real” English words of the appropriate part of speech. (The forms of the words and text used to generate the associated definition aren’t related.) A previous version of this code was featured on Filthy Ditty.