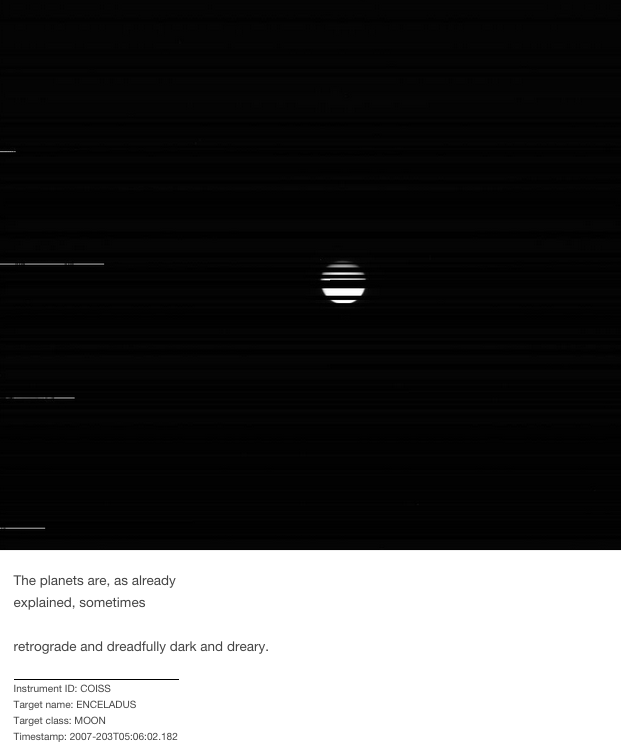 I just made a bot, called The Ephemerides, which takes a randomly selected image from NASA’s OPUS database—a repository of data from outer planet probes like Voyager, Cassini and Galileo—and posts it to Twitter, accompanied by a computer-generated poem. The idea behind the bot was to address the similarity between space probes and generative poetry procedures from the opposite direction: what would poetry written by a space probe look like?

My thought was: space probe poetry would be minimal, contemplative, turning suddenly from the technical to the lyrical and back. The poetry of Bashō, Gary Snyder and Rae Armantrout came to mind as potential points of reference. I proceded with these poets in mind and tried to produce something stylistically similar.

The text of the bot comes from two sources: Astrology by Sepharial and The Ocean And Its Wonders by R. M. Ballantyne, both available from Project Gutenberg. The first text contains references to the planets and their movements, and how those movements can be interpreted; the second text is about the open sea, water, ice and lengthy, often one-way voyages into the unknown. A perfect combination for the language of space probes!

I created the source data with Pattern by parsing each text into individual sentences, then separating those sentences into standalone clauses, then parsing each clause into its grammatical constituents, and combining all of these into a shared data structure.

To generate the poem, the procedure selects a clause at random and then, for each constituent in the clause, replaces it at random with a constituent drawn from the entire corpus that shares the same part of speech or grammatical role. The resulting text retains a lot of “grammaticality” and cohesion while still effectively introducing strange juxtapositions of the two source texts. The finishing touch is a simple procedure that enjambs the poem into stanzas and then into individual lines, roughly broken up by syllable count.

The NASA images that you usually see have been post-processed in one way or another. The images that I use in The Ephemerides are so-called “raw” images—the images that come directly from the space probe, before they’ve been edited to correct data glitches, or combine exposures at different wavelengths into a color photo, or create a larger photo from a montage of smaller ones. But I love the raw images! Somehow they seem warmer and more personal to me, which fits into the “fiction” of the bot: that these poems are a personal documentation of the probe’s own experience.

There’s no image recognition or other deep dream nonsense going on to relate the OPUS image to the text: the image and the text are selected at random, and any energy you perceive in their juxtaposition is a product of the neural network between your ears.

The bot is also available on Tumblr. The Tumblr posts include information about which probe took the photo in the post, and what the probe’s intended target was. (Most of the photos are of Saturn’s rings, because Cassini takes a lot of photos of Saturn’s rings.)

I plan to make the source code for the bot available soon—bug me if you’re interested!