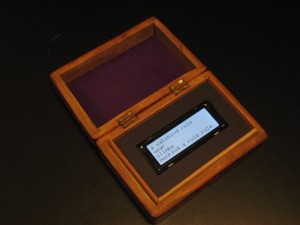 The Autonomous Parapoetic Device is a self-contained and portable machine that generates poetry. Constantly creating new sequences of words, lines, and stanzas, the APxD promises serendipitous encounters between aleatoric (but affective) text and our experience of physical space.

The text that the device generates is ephemeral: it remains on screen for only a small time, and then is replaced with a new (although algorithmically similar) text. No two interactions with the APxD are the same, leading to an endless variety of possible interpretations (is it descriptive? oracular? nonsensical?).

The APxD consists of an Atmel microcontroller connected to a 20×4 LCD screen, and runs for hours on two AA batteries. Conveniently packaged for use in the home or on the road.

Andreas Pavel describes his first foray into the outdoors with his newly-invented portable cassette recorder:

“I was in the woods in St. Moritz, in the mountains,” he recalled. “The snow was falling down. I pressed the button, and suddenly we were floating. It was an incredible feeling, to realize that I now had the means to multiply the aesthetic potential of any situation.” (NYTimes link)

The effect is well-known to anyone with an iPod: the serendipitous juxtaposition of sound and place expands and mutates both. The iPod’s shuffle function amplifies the effect: an unexpected song played over a familiar environment brings with it a new (and potentially revelatory) reading.

In this way, the iPod—and similar portable devices—recall the work of interventionist and site-specific artists, such as Gordon Matta-Clark and Max Neuhaus. Their work, according to critic Brandon LaBelle, functions as an “urban infiltrator,” posing “counternarratives as to how architecture may perform” (Background Noise, p. 161). Like skateboarding and graffiti, like the works of Wodiczko and Holzer, portable electronic devices have the potential to create “an
unexpected and sudden eruption of meaning where society had previously been content to say nothing” (Ian Borden in The Unknown City, p. 186).

The APxD seeks to approach these issues from a textual point of view. Can words have the same interventionist effect on space that sound has? Of course, a book or a newspaper can be read anywhere. The wrinkle that the APxD introduces is its aleatoric nature: no two glances at the screen are the same; no two encounters between the text and the outside world are the same. It’s like having a portable Tristan Tzara. 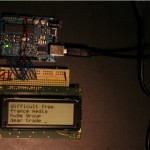 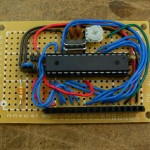 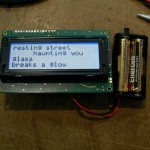 The APxD consists of a 20×4 LCD character display, driven by an ATmega168 microcontroller. The microcontroller was programmed with Arduino. Here’s the Arduino source code.

The Autonomous Parapoetic Device was inspired by the following poets and projects: