I kept a blog tracking my progress while making my thesis interfaces, which can be found here. At the end of the semester, I gave a twenty minute presentation that talked about the interfaces and some of the theory behind them; a link to this presentation is available on request. The rest of this post is a summarized version of my thesis paper (PDF).

The Oulipo Keyboard is a commonplace computer keyboard—with a twist. A number keys on the keyboard have been rendered inactive—namely, every vowel key except e. 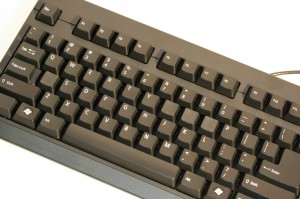 The Oulipo Keyboard is an example of an interface that NIME theorists John Bowers and Phil Archer might call an “infra-instrument”: an existing instrument that has been broken or restricted. It’s the simplest implementation of a New Interface for Textual Expression. The writer must make tactical adjustments to their writing practices in order to compensate for the unexpected affordances of the interface. The resulting text bears the traces of the interface through which it was realized.

The Entropic Text Editor is a tool for creating concrete, nonsensical poetry. It consists of a keyboard, a repurposed analog expression pedal (originally intended for use with an electronic musical keyboard), and a text editor. The text editor is programmed to modulate the text according to the position of the pedal: as the pedal is pressed down further, more randomness is applied to the character being typed.

Three kinds of “randomness” are applied to the text in response to the pedal’s position. The first is the letter’s identity—i.e., whether the letter comes out as itself, or a letter nearby in the alphabet. The kerning of the characters and the weight of the typeface are also affected.

The Entropic Text Editor is another example of a simple New Interface for Textual Expression, what might be termed an “augmented” textual interface (by analogy with augmented musical instruments, such as Dan Overholt’s Overtone Violin). The hands are free to engage in the familiar act of typing, but another channel of information is added, which modifies how the typing works. The artifacts that result from the Entropic Text Editor incorporate not just the literal content of the text, but also a history of the writer’s gestures. 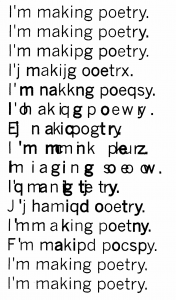 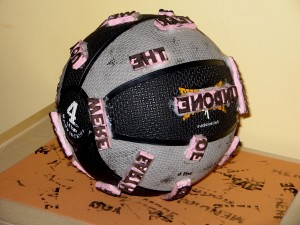 The Poem Sphere is an example of a non-digital textual interface: purely physical, it operates without assistance from a computer. It consists of a four-pound medicine ball with linocut words glued to the outer surface. When you ink up the ball and roll it across a surface, it creates a composition: fragments of words, spread across the page.

The Poem Sphere provides a new way of making text that is expressive but not literal. Using this tool, the writer’s choices about how the text unfolds involve tactile and choreographic decisions, rather than decisions about letters, words, and sentences. The goal was to create concrete poetry, in the vein of Apollinaire’s Calligrammes, the French Letterists, and bpNichol, while emphasizing the physical process that brought the text into being. 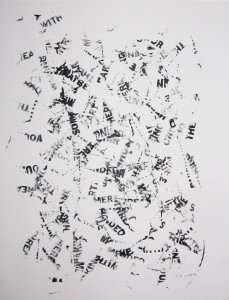 Markov Live! is a physical interface for an algorithm: namely, a Markov chain. 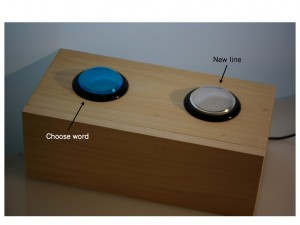 Here’s how the interface works.

Markov Chains are a well-known tool for generating poetic texts, being first used for that purpose no later than Hugh Kenner and Joseph O’Rourke’s Travesty generator, released in 1984. Gnoetry uses a similar algorithm. The Markov Live! interface and Gnoetry are similar in that they both use human input to “guide” the algorithmic process. Markov Live! introduces a temporal dimension—decisions about the text are made in real time—and an element of performance: the writer/player must time their button presses carefully in order to achieve the desired text.

Beat Poetry is an example of a synaesthetic textual interface: it maps the act of playing a musical instrument (specifically, drums) to the act of writing text. The interface consists of two electronic drum trigger pads, two drum sticks, a computer screen, and an audible indication of the beat. 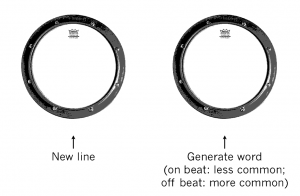 Words from the “common” set tend to be shorter, monosyllabic words from the grammatical classes of article, pronoun and preposition (e.g., the, he, to, in, etc.), while those in the “rare” class tend to be heavier, polysyllabic nouns and verbs (e.g., refrained, instinct, dissimulation). Mapping rare words to the beat and common words off the beat tends to reproduce the natural lexical rhythm of English text (disregarding semantics).

NITE stands in contrast to some contemporary approaches in digital poetics, in its emphasis on creating new ways of writing text, rather than new ways of interacting with it. The following passage from poet and critic Talan Memmott’s essay Beyond Taxonomy: Digital Poetics and the Problem of Reading, contains language and metaphors that will help elaborate on this point. “Digital poetry presents an expanded field of textuality that moves writing beyond the word to include visual and sound media . . . . Its performance or poetic emergence requires the participation of a user or operator to initiate the computational process encoded by its author. Like a musician playing an instrument, a user could be said to play an application.” (My emphasis.)

Although Memmott’s passage ends up in the same neighborhood as NITE—asserting that a text can be “played” like a musical instrument—the model he suggests for digital poetics is very different. That model looks like this: in digital poetry, the author creates a work (an application), then encodes it behind an interface; the user’s job (the term user is especially important, opposed here to author) is to decode the work obscured by the interface. The interface and the text generated by the interface are considered to be an inseparable unit. Digital poems, in this model, are standalone machines—ergodic texts, to use Espen Aarseth’s terminology. Here’s what that model looks like (the blue box represents the interface):

The model proposed by New Interfaces for Textual Expression, on the other hand, places the interface between the text and the author. The interface mediates the text’s creation, but is not synonymous with it. The “user” of a New Interface for Textual Expression is the author, and the role of the audience is not to decode the interface, but to witness (whether during or after the fact) the author’s act of creating the text. Although the texts created with these interfaces require unique methods of reading in order to be fully understood, they need not be screen-based, multimedia, or interactive. Here’s what the NITE model looks like.

The devices presented here are intended to establish a basic taxonomy of textual interfaces. Some possibilities for further work include physical interfaces for other common text generation algorithms (such as a context-free grammar), or for rearranging other formal units of text (sentences, paragraphs, verses, acts). Experimentation with the form of the interface—haptic, wearable, collaborative—also seems like a fruitful area of research.

The possibility that interests me the most, however, is public performance of text. NITE’s new configuration of author, interface and audience suggests that the creation of text is itself a kind of performance. With the right interface, the writer—essentially a performer of text-creation—could become a (public) performer on the same level as the dancer, actor, and musician.

Since I wrote and presented my thesis in 2008, I’ve made a number of other prototype programs and devices that fit under the NITE rubric.