In programming, recursion is the term for when a function calls itself. It’s useful when we’re working with problems that can be defined in terms of themselves, and when working with nested data structures.

It’s true that we could use also solve this problem without using a recursion (using, say, a while loop), but the recursive solution is more elegant and readable.

The most common practical problem solved with recursion is traversing a nested data structure. The following program (extract_strings.py) is an example of such a program. It uses BeautifulSoup to visit every tag in an HTML document and print out only the contents of those tags—in essence, extracting only strings from the page.

The trick to this program is knowing how the Tag class works in Beautiful Soup. Tag objects have an attribute called contents, which is a list of all elements that are direct descendants of that tag in the document. Some of the elements of contents are themselves Tag objects; others are just strings, which don’t have any descendents in the document hierarchy.

Starting with a given element (whether Tag or string), the extract_strings function first checks to see whether the object is a Tag object; if so, it calls itself on each element of the Tag object’s contents list. If it’s not a Tag object, it must be a string, and so we print it out. Each successive call to extract_strings will dig deeper into the document, until eventually we’ve found all of the document’s strings.

Exercise: There are some tags, like script, whose content we may not want to extract. Modify this program to not extract strings from script tags or any tags beneath script in the document hierarchy. 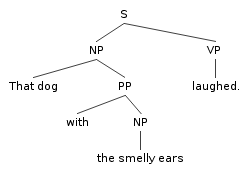 After instantiating the object, we add rules to the grammar by calling the add_rule method, whose first argument is a non-terminal symbol and whose second argument is a possible expansion for that symbol. The get_expansion method takes the axiom, and then “expands” that axiom out into a full sentence, following a set of steps very similar to the one we followed above. The above grammar, for example, will create output that looks like this:

Let’s break it down, piece by piece.

self.ngrams is a dictionary, with rules (as strings) as keys, and possible expansions of those rules as lists of tuples (as values). The add_rule method provides an easy interface to this dictionary.

The expand method of the ContextFree class is where the heavy work gets done: taking an axiom and turning it into a full sentence.

The expand method then loops over every element in random_expansion and calls itself to expand that symbol. This is called recursion: when a function calls itself. Recursion is a handy tool in programming, especially for tasks that are self-similar—such as generating sentences from a context-free grammar. 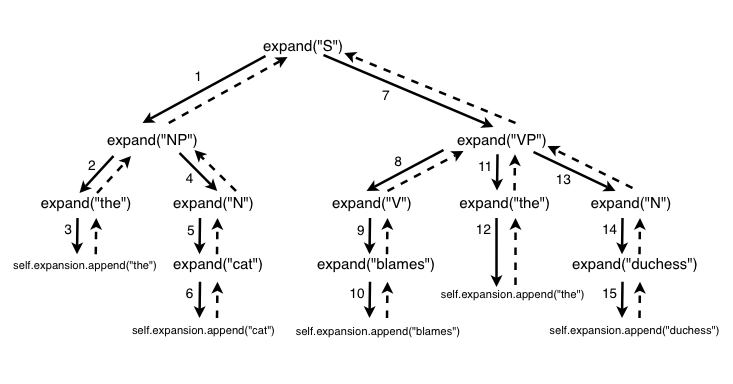 The order of calls is important. The expand method expands the left-most symbol to its full depth (e.g., all the way down to self.expansion.append()) before it moves on to any more symbols.

Okay, so the ContextFree class has functions to add rules to a grammar and to generate sentences from that grammar. So far, though, we’ve had to specify those rules inside the program, calling add_rule by hand. “It would be nice,” I hear you say, “if we could specify the grammar in a separate file, then write a program to read that file in and build the ContextFree object accordingly. That way, we can make changes to the grammar without recompiling our program.”

We’re going to implement our parser for this class by subclassing the ContextFree class, adding a method (parse_from_file) to read the grammar from a file. Here’s the class definition and some test code:

The first thing that happens in this method is a call to re.sub("#.*$", "", line): this will replace every # character followed by zero or more other characters (.*) up until the end of the line ($) with nothing.

The pattern passed into re.search on the next line is a little bit more complex. Here’s a reading:

Then we create a match object match_obj with the results of that regular expression. If all goes according to plan, m.group(1) will have the non-terminal rule, and m.group(2) will have the expansion for that rule.

Finally, we loop through expansions and add them to our ContextFree object using add_rule. Call the program like this: