My day 1 project was about an analogy between retro video games and printmaking. 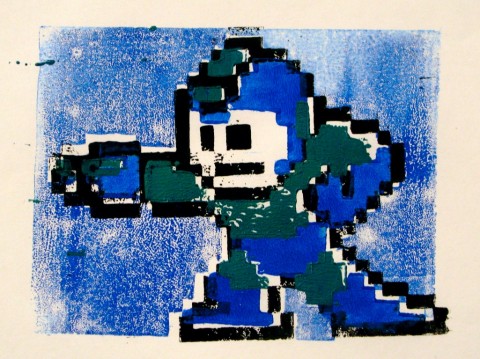 The Nintendo Entertainment System has a limited palette: of fifty-odd possible colors, only twenty-five can appear at any one time, and only four of those can be used in a single sprite. Games produced for the NES made careful use of this palette, expressing as much information through color as possible. This is famously the case in the Mega Man games for the NES, in which Mega Man (our hero) changes colors to indicate which weapon he’s using.

In printmaking (and I’m a novice at this, so let me know if I’m getting something wrong), multicolor prints are often made by overlaying a number of blocks with complementary negative spaces, producing a number of interlocking monochromatic fields. Look at it sideways, and that’s a lot like how color works on the Nintendo. 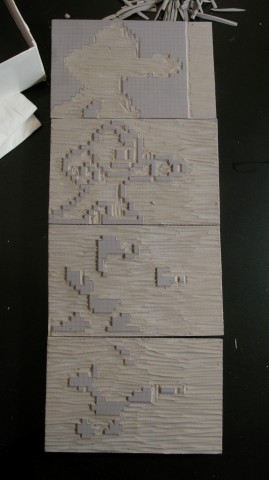 As a means of investigating this parallelism (and making some fan art in the process) I made these blocks for a basic Mega Man sprite (his shooting stance). There are four blocks: one for the background, one for Mega Man’s outline, and the two colors to indicate which weapon he’s using. The blocks were made by drawing a 32×24 grid on the linoleum, then drawing an outline around the pixels that belonged to each color area. I scored the edges of the areas with an exacto knife to ensure neatness, and then went at the thing with my linoleum cutter. That was how I spent the majority of the day.

Once you’ve got your blocks, inking and printing a bunch of Mega Men is easy. My first test print is at the beginning of this entry. I think the ragged (“hand pulled” or whatever) registration served the subject matter, so I stuck with it for the rest of the day. Here’s a larger composition I’ve been working on, in various stages of completion: 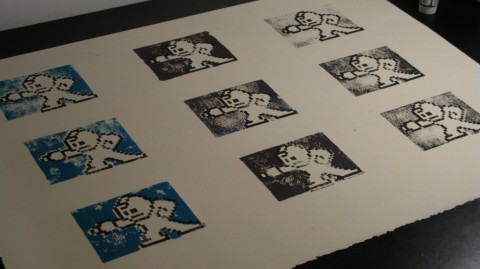 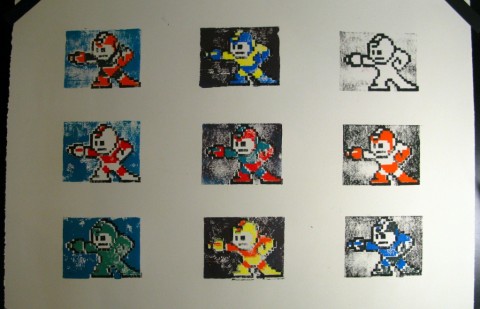 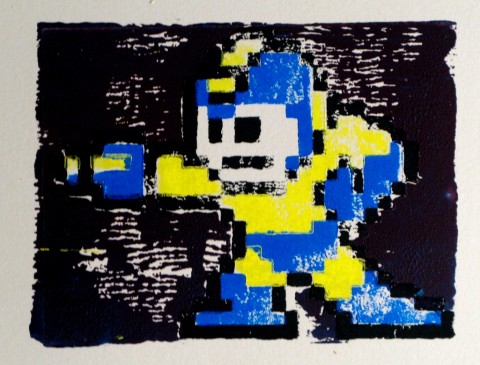